Where the hell was the AED?

TONY Guerra had just smashed through the windows of his burning house and delivered his wife to safety when he made the most awful realisation. His young daughter Brittany was still trapped inside.

The 43-year-old builder burst back into the blazing house in a brave but doomed bid to save his 10-year-old daughter, who had an intellectual disability. She died in the fire, and while Mr Guerra made it back out to the front garden he suffered a fatal heart attack there.

Brittany's mother, Kylie Guerra, 38, survived the blaze in Melbourne Road, Sorrento, early yesterday and was taken to Frankston Hospital suffering shock and smoke inhalation. Last night she was reunited with the couple's other, younger daughter, who had been staying with her grandmother 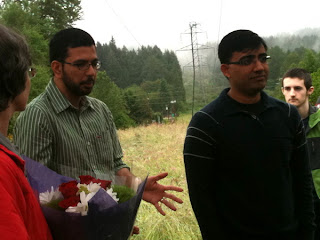 Two passersby performed CPR on Karen McClure when she experienced a heart stoppage on the Redmond Powerline Trail.
By Fernando Sioson | 12:29pm

Karen McClure knows it's likely she would not be alive today if it weren't for Nishant Kumar and Ruchir Astavans, two long-time friends and Microsoft employees who found her suffering from a sudden heart stoppage on the Redmond Powerline Trail the evening of May 19.

"If they (Kumar and Astavans) hadn't been there, I think I would have died," McClure said Saturday at a reunion for the 51-year-old Redmond resident and her two rescuers.

While running on the trail, McClure experienced sudden cardiac arrest, an incident where the heart completely stops beating. The two strangers who found McClure had never taken a single CPR class in their lives.

After a desperate 911 call, Redmond dispatchers talked Kumar and Astavans through a “hands-only” version of CPR until the Redmond Fire Department and paramedics could find the trio.

"It was luck and instinct," Kumar told McClure on Saturday. "We had seen you fall and thought you were just injured. We came closer and realized your skin and lips were blue and you weren't breathing."

According to Redmond paramedic and firefighter Skip Boylan, the survival rate for people who experience heart failure in a secluded area is 4 percent across all of King County. Bystander CPR is typically the critical element that enables patients to survive the incident, officials said.

When medics arrived on the scene, they continued resuscitation efforts for approximately 45 minutes until McClure regained a pulse and blood pressure.

"She was essentially dead for more than 45 minutes," Boylan said. "Then we finally brought her back."

On Saturday, warm greetings and thank-yous were accompanied by gifts from the Redmond Fire Department to McClure, Kumar and Astavans, including CPR home training kits and a jogger ID tag for McClure.

McClure had no identification on her at the time of the incident, so she was checked in to Evergreen Hospital as a Jane Doe until her family managed to locate her.

Also present at Saturday's reunion were Karen McClure's husband and son, who went out looking for her after she failed to return from her run.

"Dad was worried when mom didn't come back," her son Eric McClure said. "We started to call hospitals in the area looking for her, and finally someone at Evergreen told us there was exactly one person admitted in the last 24 hours who matched mom's description."

At Evergreen, McClure was put on ice to lower her body temperature, decreasing the demand on her heart. She was fitted with a pacemaker just hours after the incident.

McClure had no previous history of heart problems and exercised regularly. She frequently walked and jogged on the Powerline Trail.

Redmond Fire Chief Bob Oliver and other fire department personnel who were at the reunion agreed McClure’s rescue was an excellent success for the King County Medic One program, which dedicates police and fire department resources to teaching people CPR through classes, at home and during emergencies.

"Those two gentlemen (Kumar and Astavans) were very scared," Boylan said. "It's great to see King County citizens taking that kind of initiative."
Posted by Bob Trenkamp at 6:09 PM No comments:

PLEASE HELP WITH THIS ONE!

Students learn many skills in high school. Some they will carry with them for the rest of their lives, while others quickly fade away.

The American Heart Association has recommended, based on the latest research, that all high school students learn CPR. With the most recent version of the CPR guidelines this can easily be accomplished in a half-hour health class or phys-ed class at virtually no cost. The benefit to students, their families and their communities is tremendous.

When a patient has a sudden cardiac arrest and a bystander steps up and provides the simple steps of CPR, it doubles and sometimes triples the chance of survival. When no one starts CPR, the chances of the best EMTs and paramedics resuscitating the patient are slim to none.

A law has been proposed to require CPR training in the high schools of our state, yet legislators have not yet voted on this live-saving law. Please urge your senator and assemblyman to vote yes to the CPR-in-high-school bill before the end of this session.

BOB ELLING
Colonie (NY) Paramedic
AHA Board Member
Posted by Bob Trenkamp at 8:18 AM No comments: