Bicyclist credited with saving man in Bike the Drive 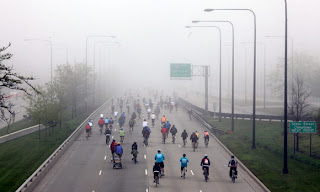 Cyclists head north near McCormick Place in a heavy fog during the 9th annual Bike the Drive today. The event closes down Lake Shore Drive from Bryn Mawr Avenue on the north to 57th Street on the south. (Nancy Stone, Chicago Tribune)

A quick-thinking physician is being credited with saving a 72-year-old man who suffered cardiac arrest as he biked in the annual Bike the Drive event this morning, Chicago Fire Department officials said.

The incident happened at about 8:45 a.m. near the North Avenue exit when the bicyclist began to fall from his bike, said Chicago Fire Department Chief Joe Roccasalva said.

Luckily for the bicyclist, a doctor who was also participating in the event was riding behind the man when he saw him begin to fall, said Roccasalva.

The doctor jumped from his bike and began administering CPR as paramedics were called, Roccasalva said.

Paramedics from Engine 98 arrived and also began giving the man CPR and shocked him with a defibrillator, Roccasalva said. They were able to stabilize the man who was alert when he was taken to Northwestern Memorial Hospital in serious condition.

The Bike the Drive event kicked off at 5:30 a.m. at Columbus Drive and Jackson Drive and ended at 9:45 a.m., according to the event website.

About 20,000 people of all ages and experience levels turned out for the 30-mile, round-trip course, which had closed the drive from Bryn Mawr Avenue on the North Side to 57th Street on the South Side.

The weather was cool and gray for riders with a dense fog advisory and temperatures in the 60s near the lake, according to the National Weather Service. The agency has issued a dense fog advisory that took in most of the region.
Posted by Bob Trenkamp at 8:26 PM No comments: