Why you need an AED at home...

You have until sundown on November 5th to get in on this!

Check http://www.slicc.org/AED_deal and learn how having an AED in your home can quintuple your chances of surviving a sudden cardiac arrest. (Seventy percent of all cardiac arrests occur in a private residence, and the ambulance can't get there fast enough to yield more than a ten percent survival rate.)

SLICC is running its annual AED group purchase again, and the AED being offered is about 40% less expensive as the best price I've found on the web!

The older you are, the more strongly I'd urge you to participate.

Bob
Posted by Bob Trenkamp at 9:37 AM No comments:

Feedback makes industry work well. Why not for EMS?

Both rescuers were recently trained and received their CPR cards.

Rescuer #1 got a call this morning and on arrival began chest compression while waiting for her partner to set up the AED.

Rescuer #2 got a call this morning and on arrival began chest compression while waiting for his partner to set up the AED. Rescuer #2's situation was different in that he had another instrument that watched what he was doing. The device played a sound at a rate of 105 per minute. The device warned him loudly when he left more than 1.8 pounds on the victim's sternum at the top of the "full recoil" upstroke. The device advised him for each compression when the depth was OK.

Which of the two rescuer's had a better chance of performing guideline-compliant chest compressions?

SLICC's measurement of a large number of bystanders and EMS personnel showed that this sort of feedback was necessary and that providing guidance was not effective in curing the problem over a period of two months or more.

Feedback - the process of influencing a process by reporting on quality on a current basis - is what industry relies on to control the quality of what they produce.

A applaud the AHA's recent requirement that such feedback devices must be used in CPR courses beginning in January. I wish it were able to extend that ruling to all EMS personnel.

Posted by Bob Trenkamp at 11:17 AM No comments:


Here's the problem:
The only reasonable solution is to have an AED at home.

Another problem: only 44% of the arrests are witnessed. There is a device that will call 911 + other, specified parties when you arrest. If the rescuer is in the same residence as you and you have an AED at home, your odds of survival go from zero percent to more than 50%, if you have an AED at home.
Posted by Bob Trenkamp at 7:59 PM No comments:

This was an interesting week. I encountered several surprising things.


By the way, when the depth guideline went to 1.5 to 2 inches, a significant number of instructors weren't able to renew their certificates because they weren't able to compress to 1.5 inches on a manikin whose stiffness was significantly less than than the average adult.

Posted by Bob Trenkamp at 8:09 PM No comments:

Driverless cars will be actively sold before the end of this decade. They will phase in over the following 20 years.
Recent evidence shows that the accident rate with a driverless car is far less than with a human at the wheel.
One consequence is that, if the "driver" is wearing a device such as iBeat, the car can re-route and head for the closest ER when that passenger / driver is recently clinically dead.
Sure beats calling an ambulance.
Bob
Posted by Bob Trenkamp at 8:31 PM No comments:

What are your odds of having a Cardiac Arrest within a year?

Your chances of having a sudden cardiac arrest in the next year depend on a lot of factors...your health, your family history of arrests, your age...

Your age? How does your age have anything to do with it? 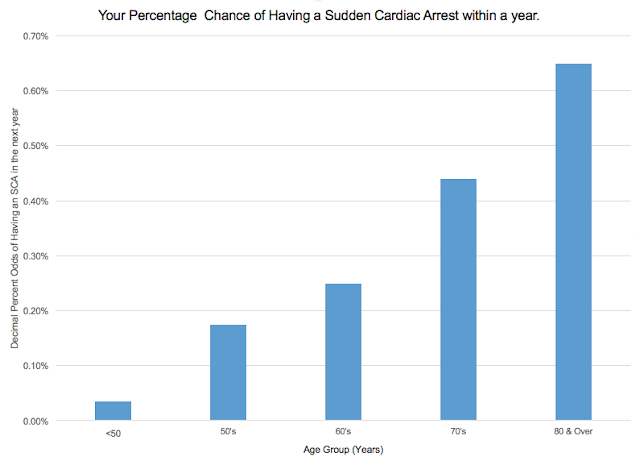 Keep in mind that these figures about age distribution are approximate. It was a lot easier to calculate and remember by using the 20% number for each age bracket. The distortion isn't major.

When you couple this info with the facts that (1) 70% of all out of hospital sudden cardiac arrests occur in the home, and (2) the ambulance is going to have a difficult time getting to the victim within ten minutes (10% survival) or within 3 to 4 minutes (50-60% survival), you really might want to consider an AED for your home.

Posted by Bob Trenkamp at 10:12 AM No comments:

The difference between performing CPR and using an AED
Which is better?
It's smart to insure against catastrophic outcomes.
Thought for the day: It's so much better to have an AED and never need it than to need it and not have it. Check out the group purchase savings at http://www.slicc.org - just click on AED_deal near the top of the left menu.
Bob  (bobt@slicc.org)

Posted by Bob Trenkamp at 5:14 PM No comments: